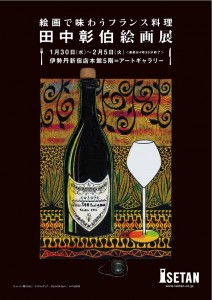 A Taste of French Cuisine In Painting
Beginning with Les Cristallines in Tokyo’s Aoyama, owner and chef Akinori Tanaka has opened French
restaurants in the Shinjuku and Shibuya districts of Japan’s capital, as well. Tanaka began painting with
the idea of decorating his own restaurants. The paintings feature fun uses of his knowledge from his career
as a chef. For his second solo exhibition at Isetan, Tanaka has a new outlook on his work, and is now for
the first time showing paintings that feature restaurant cuisine and real cooking tools and utensils.