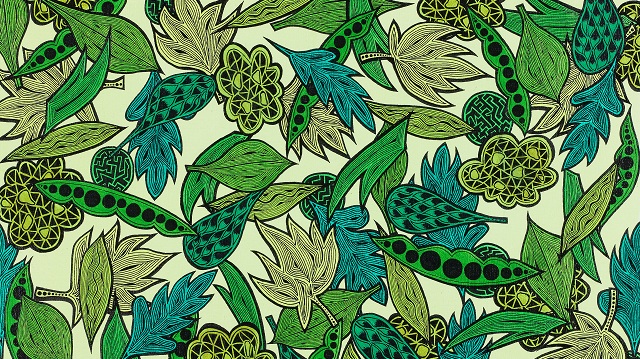 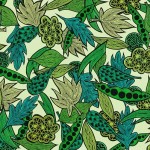 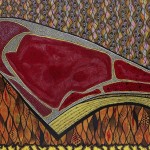 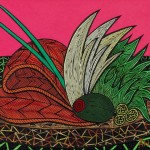 Akinori Tanaka is an artist and, at the same time, a professional chef. He uses cooking as a motif for his paintings,
but this doesn’t simply mean representing through art a careful and pristine placement of food on a plate. His work
also shows the atmosphere of the time when that food is eaten; the art thus gets to the questions of what cuisine
means to people, and what it means to eat.
Further, these pieces are filled with small triangles, geometric shapes, and extremely thin lines and other elements
that when looked upon have a mysterious feeling to them. These represent the cells of meat, fish, and vegetables; the
feel of tables and utensils; and the steam and fragrances that wrap around the food itself. The delicateness expressed,
and the sometimes shocking vividness of the colors used, are indeed works about food, but they make one feel strong
vivacity and lively movement.
Tanaka engages with each ingredient one by one, closely observing each piece, and with his unique point of view sees
the energy in life. Taking all of this in, just like cooking, he sweeps his brush across the canvas. For Tanaka, cooking
and painting are the same. The only difference is, by the end, the object of one is gone while the other remains.